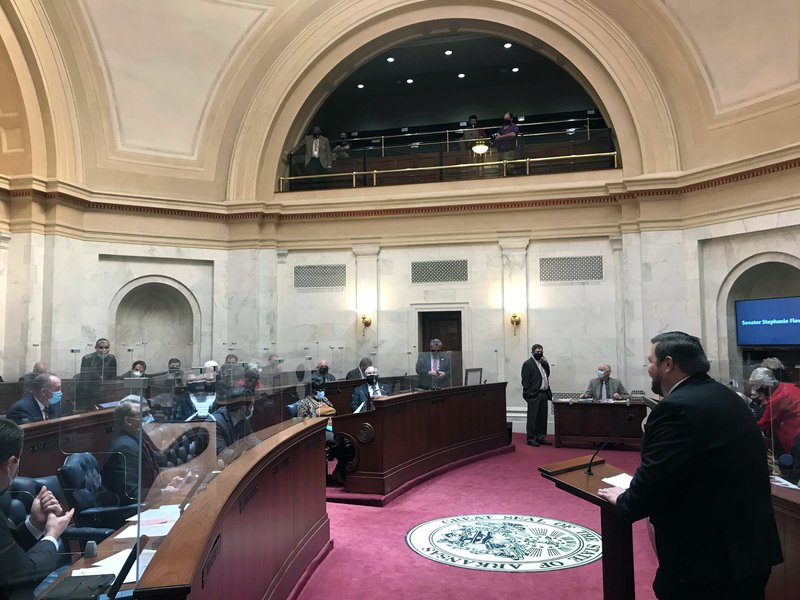 Sen. Bob Ballinger speaks to the Senate at the Arkansas Capitol in Little Rock on Tuesday, Jan. 19, 2021 about his proposal (Andrew DeMillo/AP)

The Arkansas Senate on Tuesday passed legislation easing restrictions on the use of deadly force in self-defense, sending the measure to the House.

(AP) The majority Republican Senate voted 27-7 for the measure that would remove would the state’s duty to retreat. The bill now heads to to the majority-Republican House.

A similar measure failed before a Senate panel two years ago, but has moved more easily through the Legislature after groups that opposed it have said they’re neutral to the latest version. Gov. Asa Hutchinson has not said whether he supports the legislation.

At least 25 states have laws stating that there is no duty to retreat before using deadly force against an attacker, according to the National Conference of State Legislatures. Ohio’s GOP governor earlier this month signed legislation removing that state’s duty to retreat.

“I believe most citizens don’t want to kill somebody else and they want to de-escalate,” Sen. Bob Ballinger, the sponsor of Arkansas’ legislation, said. “I believe that this bill won’t change that.”

Opponents of the proposal said the measure isn’t necessary, noting that the state’s law already allows someone to use deadly force without retreating in certain circumstances, and questioned the need to take it up in the middle of the coronavirus pandemic.

Ballinger said the earliest he would likely bring the bill before the House Judiciary Committee is next week. He said he was confident the bill could get out of the committee, where Republicans narrowly hold the majority.

Hutchinson has previously expressed reservations about changing the state’s self-defense law. In a statement Tuesday, he said he’ll continue following debate over the measure in the House but didn’t say whether he supports it.