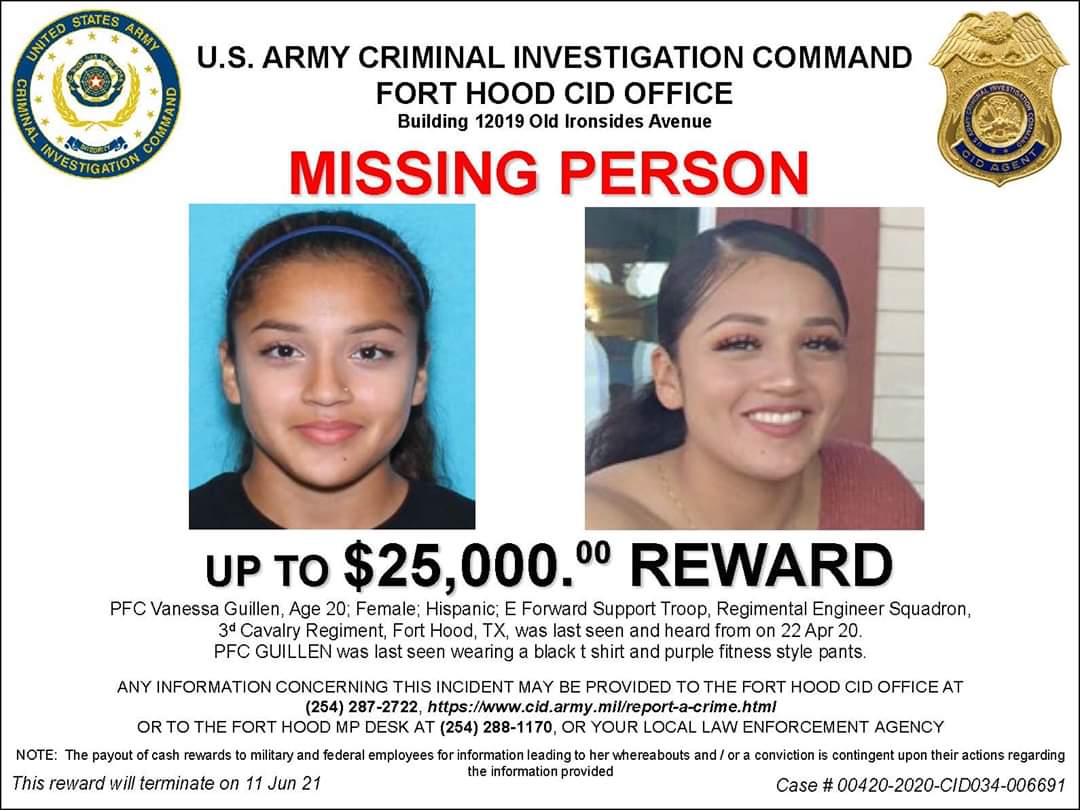 (AP) — U.S. Army investigators are suspecting foul play in the disappearance of a Texas soldier who has been missing for two months, a congresswoman confirmed Tuesday.

Pfc. Vanessa Guillen’s disappearance is being treated as a criminal investigation after she went missing April 22, U.S. Rep. Sylvia Garcia said Tuesday at a news conference with the solider’s family.

“We don’t want just attention. We want action. We want answers,” Garcia said Tuesday. “We’ve got to remember that this is a family that is hurting.”

Garcia, representing Texas’s 29th congressional district, and Guillen’s family met with Army leaders to discuss the investigation into the disappearance of the 20-year-old Fort Hood soldier.

During the meeting, family members told Army officials that Guillen told them she’d been sexually harassed by her superiors. But Guillen didn’t report the harassment because she was afraid of retaliation, said Natalie Khawam, the family’s attorney.

Khawam said she wants Congress to conduct an investigation into how the case is being handled because Army investigators haven’t been disclosing details. The only information Army leaders provided is Guilan’s last known contact on April at 11:30 a.m., Garcia said.

“There’s something extremely troubling about this case. A military base is probably one of the most secure places you can be. You have ID check-ins. There are security cameras everywhere,” Khawam told KHOU-TV on Monday.

A tip led a search team, including Texas EquuSearch, to the Leon River on Monday, but they didn’t discover anything. Meanwhile, Guillen’s car, keys and wallet were all left behind in the armory room where she was working earlier in the day on April 22, and her phone is missing.

“I demand justice and I demand their respect and that they respect my daughter as a soldier,” Guillen’s mother, Gloria Guillen, said in Spanish Tuesday. “She enlisted for her country and to protect us. And now that she needs us, we need to support her and find her.”

On Twitter, Fort Hood officials are asking for anyone with information to come forward.

A $50,000 reward is being offered for any information that leads to the soldier’s whereabouts. The U.S. Army Criminal Investigation Command and the League of United Latin American Citizens is each contributing $25,000 to fund the reward.