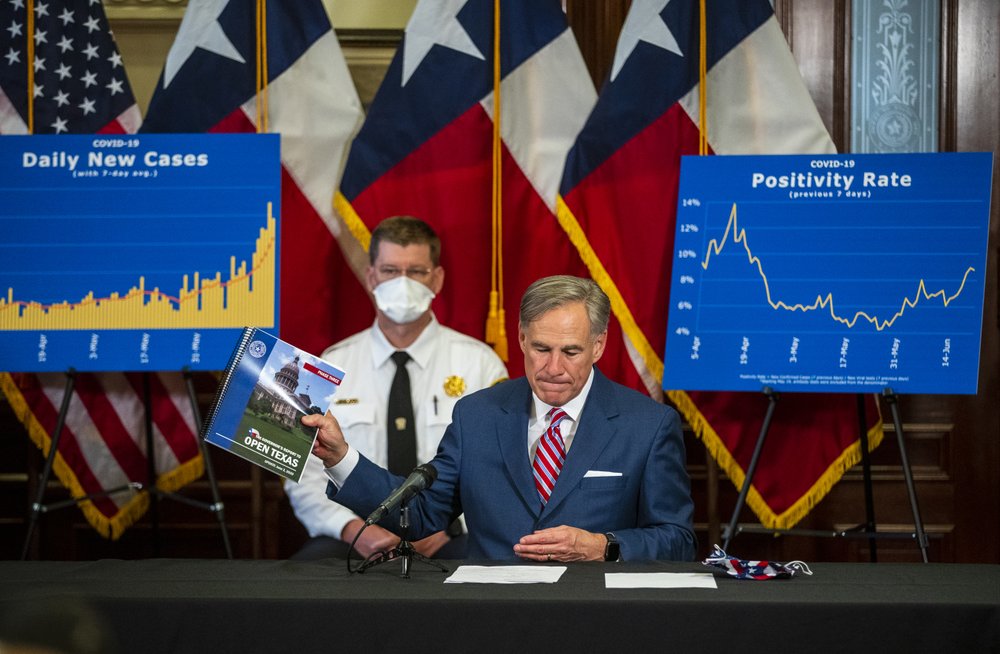 Gov. Greg Abbott stressed that the public “comprehend the magnitude of the challenge” ahead and, in a first since Texas lifted lockdown orders in May, empowered cities and counties to immediately put tighter restrictions on large gatherings.

The move reflected a more urgent tone Abbott is now taking after previously asserting that Texas’ rising numbers raised concerns, but not alarms. Dr. Anthony Fauci, the nation’s top infectious disease expert, told lawmakers in Washington on Tuesday that “the next couple weeks are going to be critical” in Texas and other states that are trying to curtail an alarming spike in new cases.

It was only last weekend that Texas surpassed 4,000 cases in a single day for the first time. On Tuesday, the record shot up to more than 5,400 new cases, and although Texas is testing more people, the rate of people testing positive inched closer to 10 percent — the highest it has been since mid-April, when Texas was still under stay-at-home orders.

Abbott says shutting down the economy again is a last resort. He is now emphasizing face coverings more strenuously than at any point during the pandemic but continues to resist calls from cities, business groups and teachers to make masks mandatory.

“There remain a lot of people in the state of Texas who think that the spread of COVID-19 is not a challenge,” Abbott told Bryan television station KBTX. “The coronavirus is serious. It’s spreading.”

Infection rates in Texas has doubled since late May, and on Tuesday, the state reached an 12th consecutive day of record COVID-19 hospitalizations with more than 4,000. That amounts to a more than 170 percent increase in hospitalizations since Memorial Day, although Abbott and the Texas Hospital Association have stressed there remains ample capacity for now.

However, some of the state’s largest medical centers are beginning to carve out more space.

Texas Children’s Hospital, the largest pediatric hospital in the United States, said Tuesday it was admitting adult patients across its campuses to free up more hospital bed space in the Houston area. The number of COVID-19-positive hospital patients in Harris County, which encompasses Houston, has nearly tripled since May 31.

Houston this week joined other big cities in Texas that took advantage of Abbott allowing them to force businesses to impose face mask policies for customers. Early on during the pandemic, Abbott took away the ability of cities and counties to set their own COVID-19 restrictions, but on Tuesday he ceded some power back and allowed them to impose restrictions of outdoor gatherings of more than 100 people.

The move comes ahead of the July 4th holiday, when public health officials have expressed new worries about large crowds.

Despite the surge, Abbott and state education officials have said it will be safe to reopen public schools in August. Local officials will decide safety measures such as masks, but the Texas State Teachers Association on Tuesday demanded a statewide order requiring masks for students and staff when class resumes for the fall semester.

“The governor can preach the benefits of wearing a mask all he wants, but as long as he continues to dodge responsibility for issuing a mask order, some school officials won’t require them, and health risks for students and school employees will rise,” said Noel Candelaria, the association’s president.